Recommendation of the day: “meat ball” on gravel 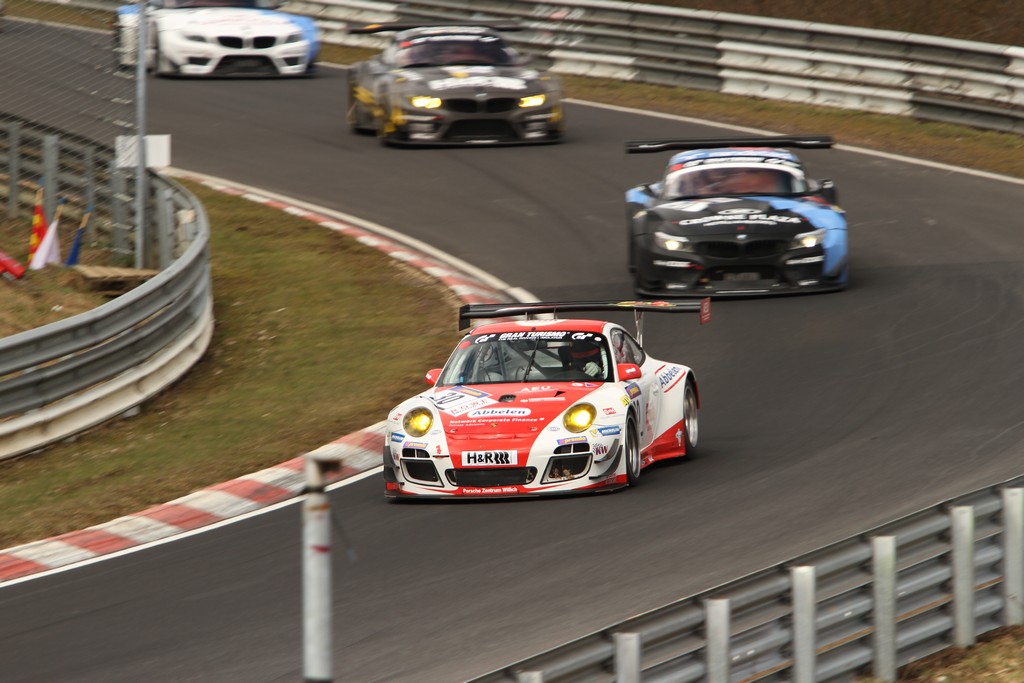 The Frikadelli- racing team eagerly awaited the start of the season to the second VLN run in 2013 after the first race of the year had to be cancelled due to weather. For the private team around Klaus Abbelen it should be the first kilometers in a new vehicle. As already mentioned in the last report there have been many changes on the new Porsche which wanted to be tested. For the 38. DMV 4 Hour- Race the regular cast of Klaus Abbelen, Sabine Schmitz (both Barweiler) and Patrick Huisman (Netherlands) was appointed.

Already on Friday the drivers were given the opportunity to test the new Zuffenhausener at a first ride in free training were it came quickly apparent that the car has much potential. “There are still things to improve, but we definitively have a clear improvement to last year”, Patrick Huisman already certified after his first test run. Klaus was obviously satisfied as well and with an as always perfectly prepared car the day of the race was anticipated. 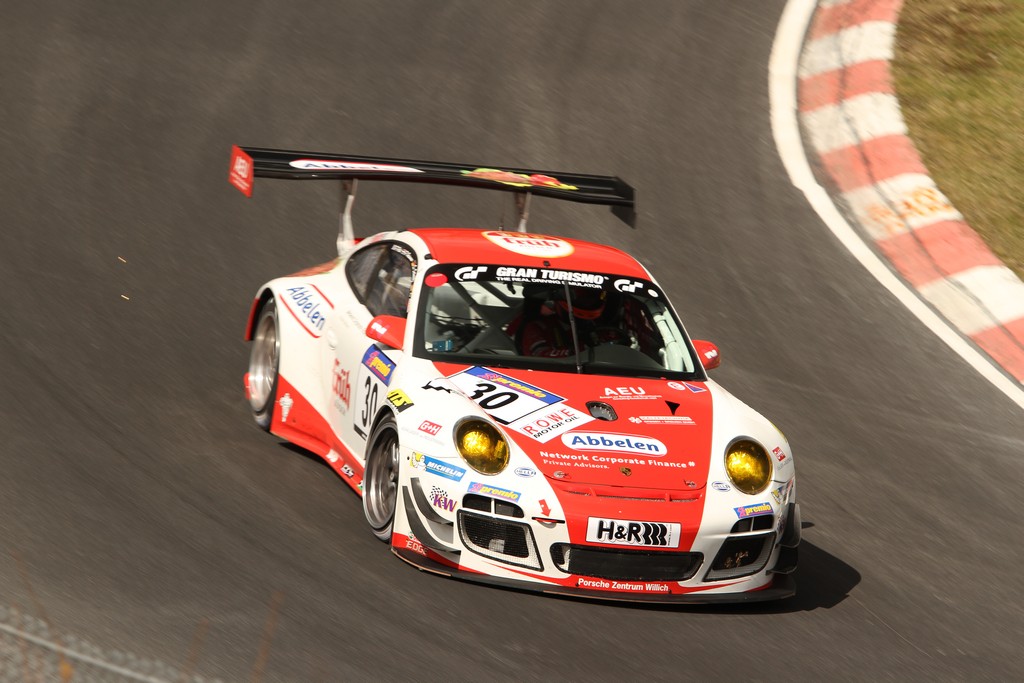 The conditions during the qualifying were difficult. With 214 competitors in the bulging starting grid of the VLN not only the traffic was a challenge but also the still wet track conditions around the old Nürburg. While “Frikadelli” himself set the first laptime for his team at this morning the conditions of the slowly drying track were distinctly better when Speedbee Sabine started her practise. She also completed her laps smoothly to deliver the car afterwards to the Flying Dutchman. Patrick gambled for high stakes and tried to set his time as late as possible to benefit from the drying racing line. The plan worked and with 8:29.176 he not only reached pole position but also declassified the competition about 7 seconds. Ever since this point it was apparent that everything was possible in this race.

It was Patrick who should start and defend the excellent results of the training from the beginning. The pressure was enormous as the field started and from the first corner onwards it was clear that a hard competition with the also revised BMW Z4 GT3 vehicles was inevitable. But Patrick did a wonderful job and had already taken a top position after the first round, breaking away from the main field alongside his Bavarian competitors. While he had to struggle for the pole position during the first minutes of the race the distance towards his persecutors was increasingly growing.

The first pit stop was a tough one. Due to the new regulations the teams with a minimum pitstop time were slightly disadvantaged. Indeed the transfer to the second pilot Sabine worked excellent, but due to the new rulebook 20 seconds were lost thus the hard- worked lead to the competition. But they who know Sabine know that she never lets anyone get the better of her. With the heretofore smallest amount of laps with a new car it wasn’t an easy task to chase after the leading competition. But after an extremely short settling-in period the lap times made it clear that the ‘Lady of the race’ was in her natural element.

Sabine put up a fight and showed a thrilling duel for the fourth place during the first rounds which – with its changes of position and hot maneuvers – ensured a breathtaking spectacle for the spectators at the screens. But after she decided the fight clearly for herself she pushed the Porsche further and made a short shrift of her competition. As she stopped for her regular pit stop she already won the lead for the Frikadelli- racing team.

From that point on the victory should not be given away. The second refuelling stop was perfectly staged and the fastes meatball of the world turned back to the racetrack to the second. But the euphoria didn’t last for long. Already on the Grand Prix stretch a lapping caused a fatal collusion which ended with a wrecked car on the grave trap. The team from pit 8 was standing aghast in front of the monitors as the cameras shown the stucked car. Team owner Klaus Abbelen commented after the race: “Despite the collusion the whole team worked excellent. With a new car and the new tires without testing the team has demonstrated what it is capable of. At the next race we will do it better.” 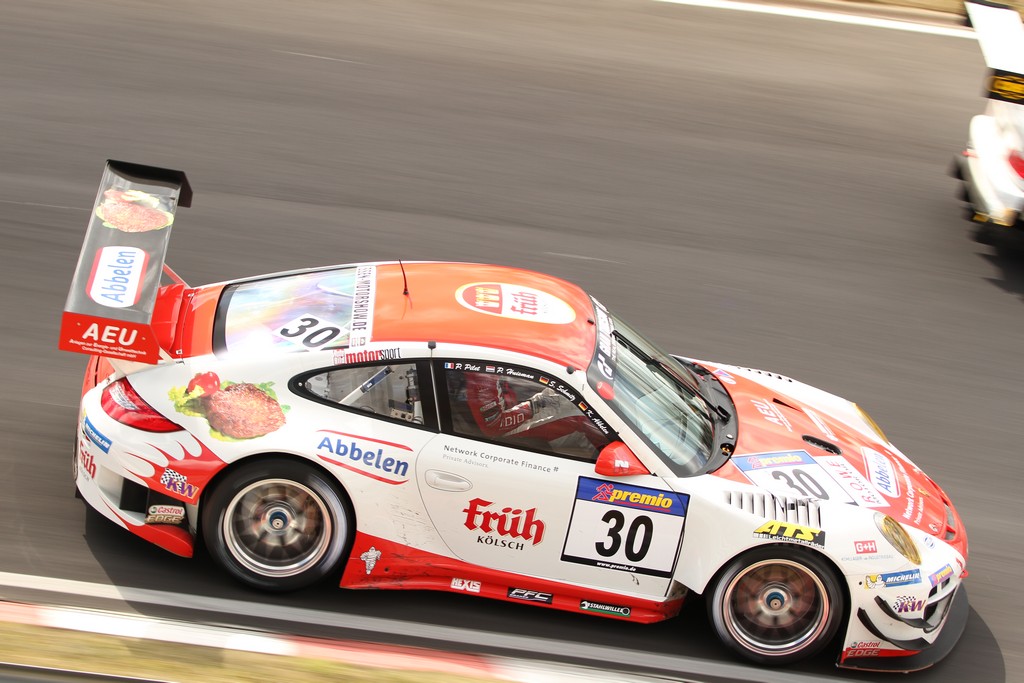