Actually the team around Klaus Abbelen and Sabine Schmitz wanted to attack in the last race of the VLN and wanted to drive the fast Frikadelli Porsche right to the top, but the gremlins had other plans. 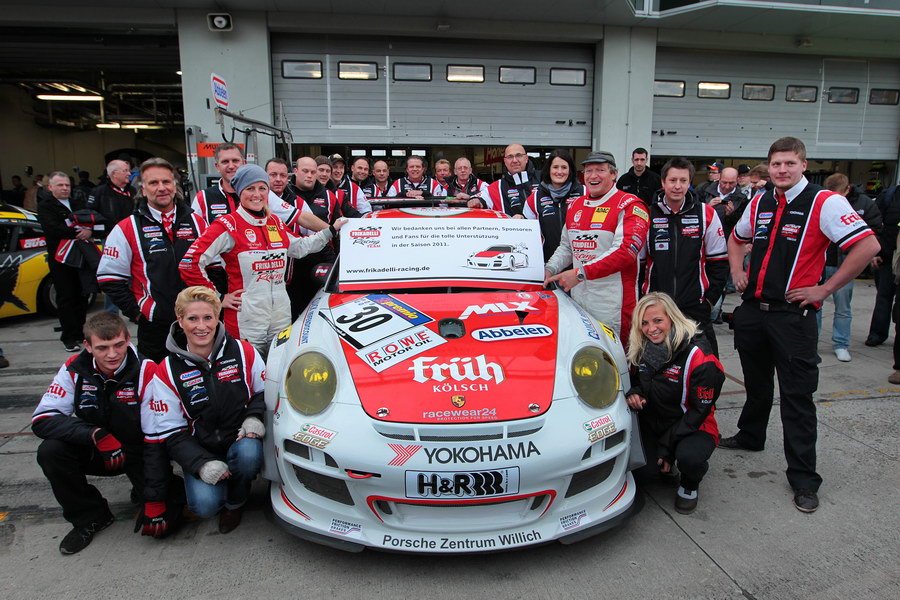 The qualifying starts for #30 started routinely and after the first lap of „Frikadelli“ Klaus Abbelen the final fine-tuning on the red-white Porsche were made. The weather conditions promissed good times for a final lap of Sabine driving. But the plan didn´t happen, to much traffic and several yellow flags meant start position 7 in the end with a under this

The start went smoothly for start driver Sabine, after a few corners she was already following the leading group, which was very strong in this race, ready and lurking for overtaking. But the hunt already found a unexpeted end in the 2nd lap: accelerating out of the Hohenrain chicane the Porsche didn´t had any power and the Speedbee had to go to the pits. The quick found error didn´t promisse anything good. A drive shaft was broken and had to be replaced, so the wish of another plave on the podium got set aside. But Frikadelli Racing wouldn´t be Frikadelli Racing if they not return to the track to finish the race after a successful repair. Sabine Schmitz commented that decision like that: “We owe that our Sponsors and fans to go back on track and finish the race and also can use the time to test our new tires from Yokohama extensive.” So the rest of the race was relatively unspectacular for the Frikadellis, however, could thus be some development work for the next season.

After the race the team said good bye to the season 2011 in its own way, like after the 6h race Sabine and Klaus had invited to the paddock. With famous music and drinks/beer from colgne a party was held in the pits and as usual Klaus Abbelen got hold of the microphone to sing some of his songs by himself

Now the team from Barweiler start their well deserved winter break. A season with many successes comes to an end. In addition to a new personal best in the fast Frikadelli Porsche there were many races finished with positions on the podium, a space under the top ten in the 24h race and a pole position in Europe´s most popular motor sport series, the VLN. For the next years season Frikadelli Racing will continue with a eye on the lead. With a optimized driver line-up there will try to get high up on one of the first podium positions. Everybody wants to meet the Frikadelli team already before the next season has the opportunity at the Motor Show in Essen from the 26th November 2011 until the 4th December 2011 or on the 2nd Frikadelli Christmas market on the 4th December at their workshop in Barweiler. Until than the Frikadelli Racing team says good bye and thank you to all fans, friends and sponsors for a great support in the season 2011.