Welcome back at the podium

With a sublime second place the Frikadelli Racing team not only celebrated a stunning comeback at the last run of the VLN long- distance championship but underpinned their win with the VLN speed trophy and the victories of the bygone season. 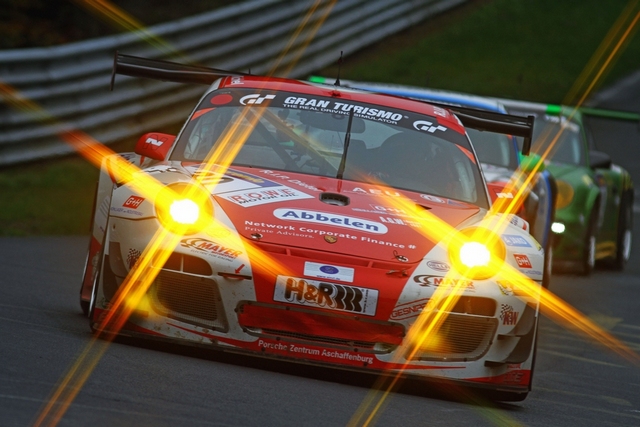 After the last run of the VLN it usually gets a bit quieter at the Eifel, but not for the Frikadellis from Barweiler. The final celebrations at the teams own saloon became legendary as a thank you for friends, the team and partners. But to have a good reason to join in festivities the last race was still to face. Due to the not-at-fault accident at the ninth run the Porsche GT3 was damaged pretty hard, but over the last two weeks the team worked very hard to get the car from Zuffenhausen in shape to compete with the opponents. So the tension was enormous but such a challenge wasn’t new for the team.

The qualifying in the morning didn’t really work as planned. Besides Klaus Abbelen, Sabine Schmitz (both from Barweiler) and Patrick Huisman (Netherlands), Frank Stippler (Bad Münstereifel) was driving for the team under difficult track conditions and limited sight. But they were out of luck and only the 14th staring position was achieved.

Klaus Abbelen took the staring position but the conditions of the track were getting worse. But Klaus seemed to be at ease and gained eight positions at the first round. The pursuit race was interrupted by the red flag – the fog at the Grand Prix track was too thick and was a high risk for the safety for the 166 participants. 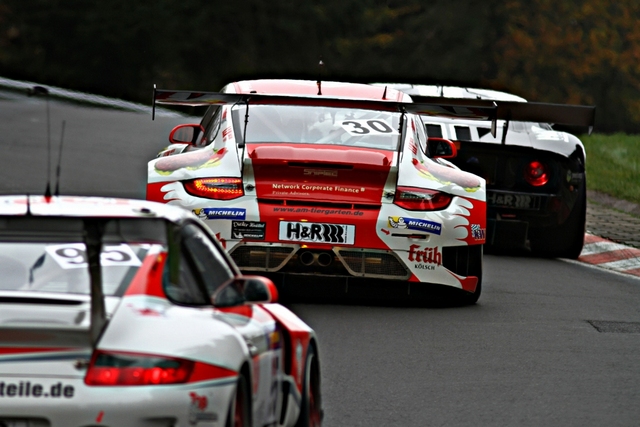 The race was rescheduled for 14:30 with a shortened distance, but the good results of the first part of the race were annulled. So Sabine had to fight from place 14 again and the choice of tyres was developing into a poker game. At the now slowly drying track Sabine had to torture herself with tyres which were designed for wet conditions and lost more positions than she could win back. The delivery to Frank Stippler was the best way of damage control.

For “Stippi” the mission was clear: to push forward with the right tyres. With a clever tactical way of driving and permanent fast lap times Frank gained the third position but due to an upcoming pit stop and a very questionable double yellow phase, which cost the team 50 seconds, this was only a flattering snapshot.

The fastest meatball of the world took a huge gulp from the pump while Patrick Huisman took over the wheel. He had a clearly defined mission: to drive towards the leading position after this long pit stop without another one. The last turn of the Dutchmen was long and at the last round he radioed to the box: “I overtook place two”, which resulted in a rejoicing of the team. So the last race was perfect according to the few of the Frikadellis: a position on the podium at the end, the car was in one piece and the team had all the reason for a celebration at the native Barweiler. 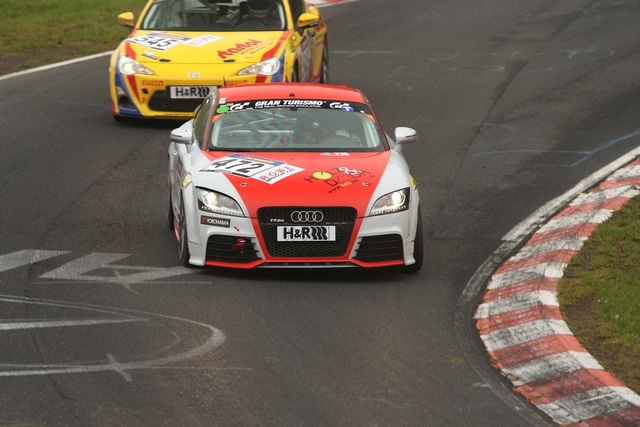 Thomas Leyherr (Dillingen), Herbert von Danwitz (Tönisvorst) and Vidar Uldeval (Norway) had reason to celebrate too: the Audi TTRS from the Frikadelli Racing team had a flawless race and won the class victory as well.

For those who want to see the Frikadelli Racing team once again this year should mark the 6th of December at their calendar. It’s the day of the traditional Christmas fair which will take place at the teams own workshop. Everyone is invited: the earnings will completely go to Wiege e.V. which will give the money to help sick children. So remember: show up at the 6th December at Barweiler!