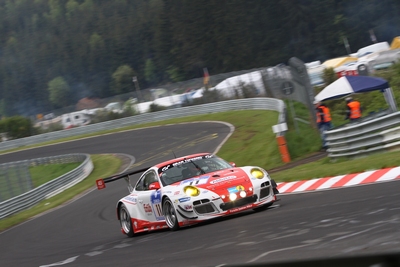 The ADAC Zurich 24h- race is without a doubt the hightlight of the season for the private Porsche “Frikadelli- Racing” Team from the picturesque Barweiler. Only once a year the hot pursuit is taking place two times around the clock on a very special composition of the track of the Nurburgring – which is a version of the legendary and in combination with the Grand Prix track is about 25 kilometers long. A special challenge for the local hero’s is the competition against the big names in the starter field due to the fact that in the 24h race nearly everyone of distinction in the field of the international touring car scene is participating. To be in the first row the crew chef Klaus Abbelen has assembled a spectacular group of drivers this year: besides himself the fastest women of the track Sabine Schmitz (Barweiler), the four time winner of the Porsche Supercup Patick Huisman (Netherlands) and the Porsche works driver Patrick Pilet (France) competed at the race. This year’s operational vehicle was the new Porsche GT3 R – an especially potent implement which was only purchased this season. 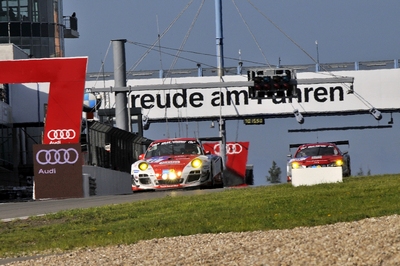 Based on the special regulations of the 24h race the first training sessions were fairly relaxed. Due to the pole position of the year in the long distance championship the Frikadelli racing has automatically qualified itself for the big top 40 qualifying of the fasted vehicles at the field. While during the first training runs only the obligatory rounds were finished and the last details on the car were sorted out – the thrilling part of the race should begin at the said “Top 40” event on Saturday. For this electrifying spectacle each of the 40 fastest cars had the possibility to get two fast laps on the track. For the team from Barweiler Patrick Huisman was destined to pilot the Porsche. Already the first flying lap was promising and pushed the team far ahead – but the car showed still reserve capacities for the second round. Patrick bombed along but at the Galgenkopf – the last stretch before a long straight arm push – he unfortunately drove into the back of the car in front of him. Therefore no improvement was possible and with a 8:23.526 from the first lap a good thirteenth starting position was secured. 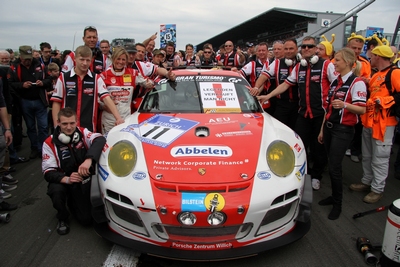 It was also the Dutchman who was destined to drive the beginning of the race and so the starting field of the 41th 24h- race took off on time on a still dry racing track. But what started as an almost idyllic race should become unnerving soon. From the beginning Huisman pressed on towards the competitors in front of him and improved his position already in the first laps of the race. The planned switch to Patrick Pilet worked perfect and Pilet continued the hunt for the leading positions. The young Frenchman – by now at fourth position – reported a technical defect while going through the section “Tiergarten”: one of the rear damper was broken and forced an unplanned pit stop. Admittedly the defect could be located and repaired directly but it was also obvious that the same fault would occur on the other side of the vehicle at some point. Unfortunately the exact thing happened only a few rounds after the first defect appeared and the team lost 23 minutes due to the repairs of these mishaps. As the car was sent off to the track after the second defect the team has fallen back on a disillusioning 38 place. From now Sabine was driving and tried everything to get back at the leading positions. Yet the weather conditions promised not only a fight against the time but also a fight against the forces of nature. The woman from Barweiler was piloting the Porsche through monsoon- like rainfalls while in parts fog was worsening the already bad visibility conditions. “I felt like a shrimp fisherman on the Bering Sea”, commented the likeable pilot about her drive through the wet. Even while she was able due to her ambitioned way of driving to get better position after position the pursuit race of the Frikadellis was brought to a very sudden end because the race organization decided a race stoppage for an indefinite period. At this point the queen of the circle Ring achieved the 25th position. 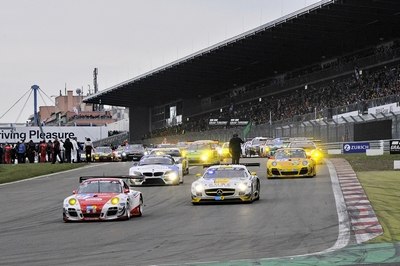 It took 9 hours until the weather conditions aloud a restart of the race. Klaus Abbelen took the wheel and made his laps on a still wet track. But Klaus too made a good job and he could deliver the car to Patrick Pilet without a scratch under these difficult conditions. While Patrick started on the track with rain tires the rest of the race was characterized by a thrilling poker for the right tires – this discipline was perfectly handled by the team which always mounted the perfect tire choosing from across all profiles of the range of Michelin tires. This made it possible that the Frikadelli- team used very few pit stops and was able to gain a few positions. The flawless stints of each pilot and the perfect executed pit stops couldn’t help to reach the superb placement at the beginning of the race again. In the end the team had to be satisfied with the 16th position. 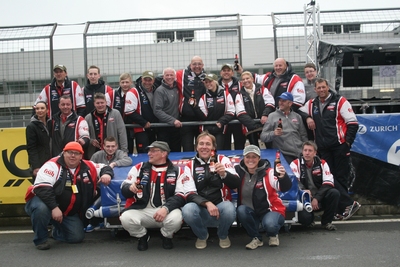 The team displayed in round 77 what could have been possible without the technical defect with an impressing time of 8:28,874 minutes. Only two other cars on the field were able to drive even faster – so the fastest meatball of the world was the fastest Porsche of the race.
But the team didn’t left the racing track without a price. Thanks to the ADAC and to the event related hourly prices the Frikadelli- racing team was able to reap the price for the most popular driver which was founded by the fans. Sabine Schmitz was happy to accept the price personally – on this occasion she and the whole team gave thanks to fans and friends which endured the adverse conditions around the track and kept their fingers crossed for the team.

Klaus Abbelen:
„We showed what we can do. Car and team were able to drive in the top field. And this we will show again at the next races. Certainly we will participate in this classic 24h race at Nürburgring and try to achieve front positions.”

Patrick Huisman:
„Mixed feelings. After the qualifying went very well and even as I was held up I had a very good feeling about the race. The car was perfectly prepared as always and even as we were too low regarding the tire pressure at my starting turn everything went well. We were able to work our way up and I was able to deliver the car on the fourth position. After the damper broke two times while Pilet was driving every chance for a good placing was lost. On the other hand we learned a lot concerning the tires and this gives me more confidence for the next races. In addition it was nice to see that the team did a very good job and worked hard till the end to achieve the maximum. Furthermore I’m happy that Klaus had a dry track for the first time this season. So he was able to achieve his personal best lap. “