On Saturday the 31st March was the long-awaited go-ahead for the first race of the VLN season 2012. Even before this, preparations were in full swing at the workshop of the Barweiler race team. With a brand new tank, the vehicle regulations of the car were technically entirely up to date and it was hoped that a tactical advantage over the strong competition from the sports car manufacturer from Stuttgart was given. To make that sure the team was still working in the last week up into the night to provide an absolutely perfect car.

For the qualifying difficult conditions were announced. 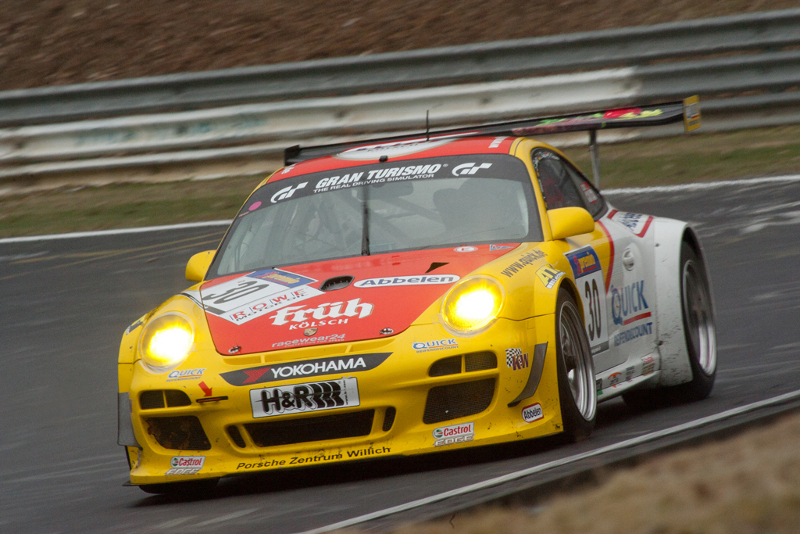 Changeable weather and a wet track made the first quick lap into a dangerous poker game. Only at the end Christopher Brueck should go out again to have the best possible position. At this stage, only the ideal racing line on the Nordschleife was dry, which made a quick lap very dangerous. Chris therefore took no risk and put in a clean lap, which meant the 7th starting position. The expectations for the race were therefor very high.

The start of the race took place in time at twelve clock and was a true masterpiece. Chris Brueck was again behind the steering wheel and made it possible to get from his seventh starting position as 4th onto the Nordschleife. What then got offered by the leading quartet, was racing at its best. Flying in a formation the four Porsche raced through the forests of the Eifel and done lap after lap top times. For the rest of the field it was no longer possible to follow the unleashed convoy.
For the first scheduled pit stop, the start driver gave the car into the hands of Speedbee. Sabine Schmitz, the second of three drivers for this weekend, was looking forward to some hot fights for the best positions and to continue the hunt in tricky weather conditions.

The disillusionment followed, however, promptly, as the yellow-white-red Frikadelli Porsche, now lying on third place, was noted to the race control for the first stint. A sports punishment by violating a flag signal in the heat of the moment ruined any hope for a good result. 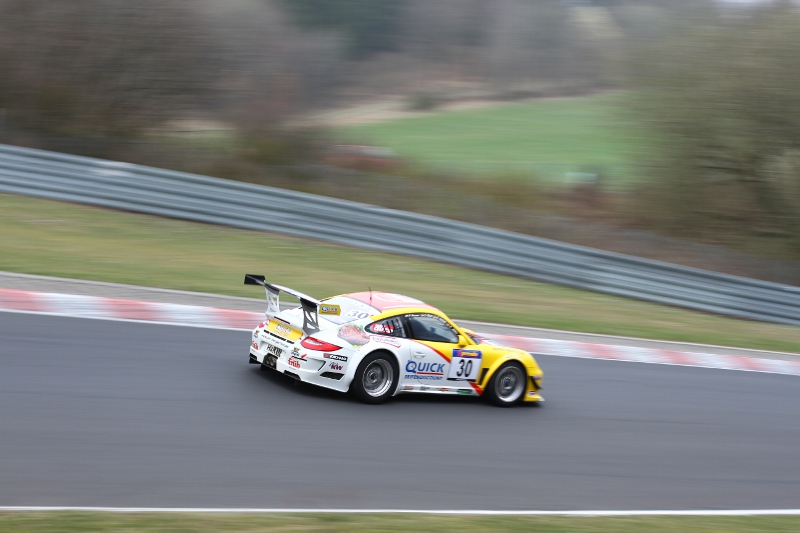 By withdrawing a lap of the race, the team of Klaus Abbelen was now only an statist in the field.
Nevertheless, the decision to continue the race as it has begun was made quickly. Sabine showed the porsche the spurs and fought now no longer against the other teams on the track, but against the weather conditions and the constantly-increasing rain. Due to increasing number of accidents and dense the race got stopped via a red flag at 14:43. Just minutes after the race organizers decided to cancel the race to avoid injury.

But for Team boss Frank Lynn was the race still not a flop. "With the seventh on the grid in qualifying, we are already qualified for the top 40 of the 24h race. That takes us lots of wight from the shoulder".